Cancer is the second leading cause of death in the world. As we all know, a healthy diet is key to preventing a devastating diagnosis. Extra virgin olive oil has long been associated with lowering the chances of dying from cancer.  Most recently, in 2022, a Harvard University study found that people who consume at least 1.5 teaspoons of olive oil per day have a 17% lower risk of cancer mortality[1].

Researchers have been studying the mechanisms for how olive oil prevents cancer for many years. The reason is likely not a single factor, but a multitude of ways in which consuming olive oil protects our bodies.

The type of dietary fat consumed has been studied as a risk factor for cancer, especially colorectal cancer. Animal and saturated facts have been associated with increased cancer risk. Olive oil contains the types of fatty acids that are considered healthy and are associated with lower cancer risk. [2]

All types of olive oil have a healthy fatty acid profile, but only extra virgin olive oil is rich in antioxidants which are being studied for their ability to prevent and fight cancer. The antioxidants scavenge free radicals in your body and neutralize them, which can prevent cells from becoming cancerous.

Special attention is being given to some special antioxidants found in extra virgin olive oil, oleocanthal, and hydroxytyrosol.

The phenolic antioxidant, oleocanthal, has been found to kill cancer cells.  Oleocanthal is made when olives are crushed to make olive oil[2]. The compound can puncture a cell's lysosomes, which are where cells dispose of waste. Cancer cells often have larger and more numerous lysosomes, making them more vulnerable to oleocanthal than other cells. When the lysosomes are damaged by oleocanthal, the cell dies within 30 minutes instead of the normal 16 to 24 hours. Notably, oleocanthal does not damage healthy cells.  This research was performed on breast, pancreatic, and prostate tumor cells.[3] Additionally, oleocanthal has also been found to shrink tumors in mice. [4,5]

Hydroxytyrosol, another antioxidant compound found in olive oil has been found in studies to have an antitumor effect on several cancers including colon, breast, pancreatic, leukemia, and melanoma. [5] Hydroxytyrosol reduces cell proliferation and induces the death of cancer cells.

Which olive oil do I need to consume to protect me from cancer?

The best source of olive oil polyphenols is extra virgin olive oil.  The amount of polyphenols in the olive oil is dependent on when the olives were harvested, the types of olives used, and other factors. While you can't know for sure the polyphenol content of each olive oil, you can detect the polyphenols in olive oil by tasting it at home.  According to Dr. Vasilis Vasiliou of Yale University, “When you eat olive oil that has high content [of oleocanthal], you get a little burning in your throat. You may think that this is a bad quality, but that’s the opposite — it’s the [oleocanthal]”. Among the most popular olive varieties used to make olive oil, Arbequina olives, for instance, tend to be relatively low in polyphenol content while Coratina, Koroneiki, Cornicabra, and Picholine tend to have higher content.  [6]

So choose extra virgin olive oils that you like, and use them frequently, for both raw and cooked dishes.  Remember, it is best to consume an extra virgin olive oil quickly after opening the bottle--certainly within 2-3 months--if you want to maximize the polyphenol content (which can dissipate with both age and exposure to heat, light, and air).  To learn more, read our olive oil storage tips.

[6] If Your Olive Oil Tastes Like This, It Could Help Fight Cancer 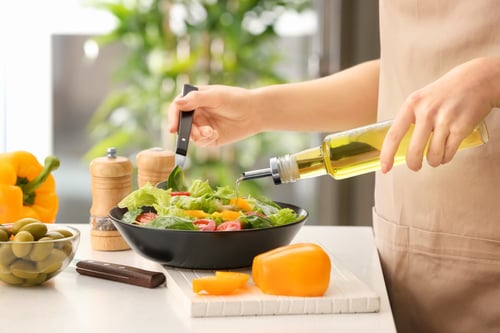 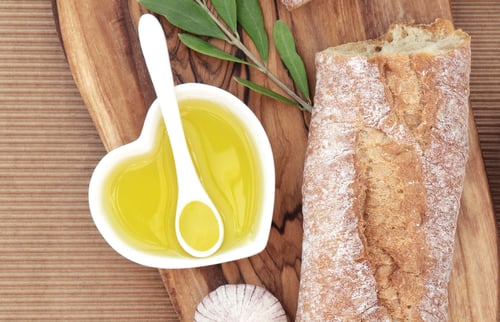