The Vatican Wants to Know: What is the role of olive trees in supporting a healthy, sustainable, and just world?

On May 3-4, I was privileged to be part of a small invitational conference entitled “The Art & Science of Olive Oil: Nutrition, Medicine and Planetary Health,” held at the Pontifical Academy of Sciences (PAS) in Vatican City. The conference explored a variety of issues related to olive oil, including robust discussions about the role of minor nutrition constituents like polyphenols, and the need for further research on sustainability. 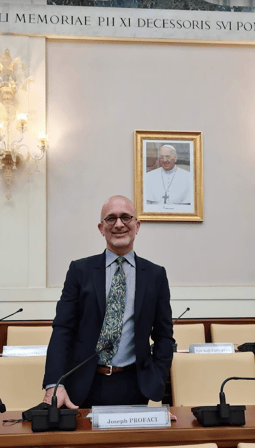 The PAS traces its origins to the first academy of sciences in the world, founded in 1603 (Galileo was one of the first members before clashing with the church). Re-established most recently in 1936, the mission of the PAS is to promote the pursuit of knowledge and scientific research.

For this conference, PAS Chancellor, Marcelo Sanchez Sorondo brought together 30-odd scientists and experts from a variety of fields for two days of presentations and discussions to consider “the true value” that olive oil represents “to our health, to our cultures and the sharing of food with family and friends”—and to the health of the planet.

Dr. Joachim von Braun, the PAS president spoke the first morning and urged the participants to consider olive oil in the context of the global food systems with special attention to the global food crisis caused not only by the economics of agriculture but diet related health care costs and food waste. He further urged the conference to consider what steps might be needed to assure that the olive tree can survive global warming, possibly even including genetic modification if necessary to preserve the olive oil culture for the protection of people and the environment.

During the first part of the conference, prominent nutrition scientists from around the world gave presentations, beginning with Dr. Walter Willett from Harvard University. Willett posed several overarching questions that he challenged the participants to keep in mind: Can we separate the benefits of a Mediterranean Diet from those of olive oil? How much of the benefit of olive oil is due to its fatty acids vs minor constituents like polyphenols? Is olive oil better than other plant oils? What studies could be done to better understand the role of olive oil in health? And perhaps the question that sums up all the others: What is the role of olive trees in supporting a healthy, sustainable, and just world?

Dr. Frank Hu, also from Harvard, next focused on the role olive oil can play to counter the diabetes epidemic brought on by cheap, highly processed foods, as well as the risks presented by cardiovascular disease from the consumption of unhealthy fats. He stressed that eating healthy fats—especially monounsaturated fats like oleic acid in olive oil—has the potential to minimize the oxidative stress and inflammation that exacerbates diabetes and cardiovascular disease. He also made the important corollary point that studies show increasing consumption of olive oil does not contribute to weight gain. Dr. Hu concluded by addressing the need to promote sustainable nutrition which must balance considerations of health/nutrition, economics, environmental impact and cultural acceptance.

Dr. Ramon Estruch from the University of Barcelona considered the impact of olive oil consumption on health in terms of improving lives, both in terms of quality (vis-à-vis cognitive function) and quantity (vis-à-vis the prevention of death from cardiovascular disease). Dr. Estruch also focused on the role of oleic acid but pointed out that current research is showing significant positive correlation between polyphenol consumption and cognitive function.

Dr. Michael Aviram from the Israel Institute of Science and Technology spoke about the importance considering olive oil’s health benefits of in the context of eating foods and their nutrients in the whole form (as opposed to supplements) and in combination with other foods, which is believed to be a critical component of the Mediterranean diet. 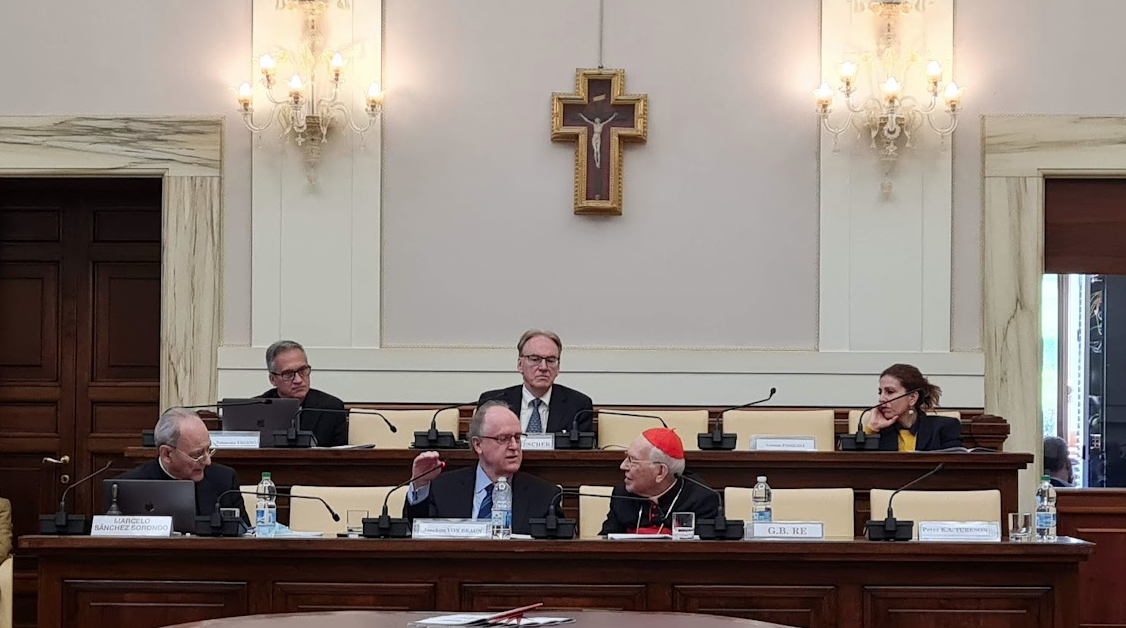 A group of leading researchers on the Mediterranean diet next echoed this last point in their presentations: Dr. Francisco Sofi from the University Florence, Dr. Antonia Trichopoulou from the University of Athens, and Dr. Miguel Angel Martinez-Gonzalez from the University of Navarra. Each summarized some of the latest research but suggested that given the substantial research establishing the health benefits of the Mediterranean diet, we are at an inflection point. Dr. Sofi cited a need to eliminate nutrition confusion through innovation. Dr. Trichopoulou went further, saying it is time to convert the evidence we have about olive oil's health benefits to public policy—for health care, of course, but also for culture, the environment and the economy.

The next session considered ways to put policies into effect. Dr. Stefanos Kales from Harvard University said that the Mediterranean diet is the most evidence-based of all recommended diets, and one that most significantly connects with the Greek word for “way of life” (“THIAITA,” from which the English word “diet” derives). Greg Drescher from The Culinary Institute of America, who played an important role in the development of the Mediterranean diet pyramid concept in the 1990’s, addressed the work CIA is doing in conjunction with several universities to develop culinary strategies to make our food system “plant-forward” as a model for human and planetary health

Dr. Jean-Xavier Guinard from University of California at Davis and Dr. Gemma Pasquali of Oleoteca Campestri in Tuscany highlighted the importance of sensory experience and enjoyment of olive oils. They presented research on “fat-flipping,” using olive oil in place of less healthy fats typically used in certain recipes from a consumer taste perspective. (Dr. Guinard also proposed that the classification of EVOO should be based strictly on a chemical analysis.)

Drs. Tassos Kyriakides and Vasilis Vasiliou from Yale University discussed their work in establishing an institute at Yale focused on the olive tree and its products (the proposed Yale Olive Sciences and Health Institute, or YOSHI). The YOSHI would facilitate olive research and scholarship, education, preservation, and practice in order to further support actionable public policy for human and planetary health. Dr. Vasiliou stressed the benefits that could be provided by artificial intelligence in the study of the Mediterranean diet—including a consideration of the role it may play in addressing current day environmental risk factors such as exposure to carcinogens. Dr. Vasiliou also called for more research on improving the sustainability of olive oils, a concept that Dr. Willett further supported.

The second day of the conference opened with a session devoted to the nutritional value of the minor constituents of virgin olive oils, specifically polyphenols. Dr. Willett surveyed research on the connection between olive oil consumption and cognitive health and called for more research on the role played by polyphenols, vitamin E and squalene from olive oil in the health benefits the Mediterranean diet, which was seconded by others at the conference.

Francisco Jose Alarcos Martinez from the Loyola University of Andalusia and co-founder of an organic olive oil company in Granada supported the concept of agricultural methods that would increase phenol content. He spoke specifically about the effects on polyphenol count from high altitude olive orchards.

Dr. Prokopios Magiatis from the University of Athens summarized his research analyzing the wide-ranging polyphenol content of 10,000 samples of EVOO. He stressed the importance of further study of oleocanthal and oleuropein—two olive phenols that are unique to olive oil—and not present either in the olive fruit, leaves or in olive oil waste water. He also provided highlights of promising phenol health research in connection with inflammation, blood pressure, cognitive function, multiple sclerosis, and cancer. He called for the authorization of health claims for consumption, although he maintained that the level established by EFSA at 250 mg/Kg was too low. 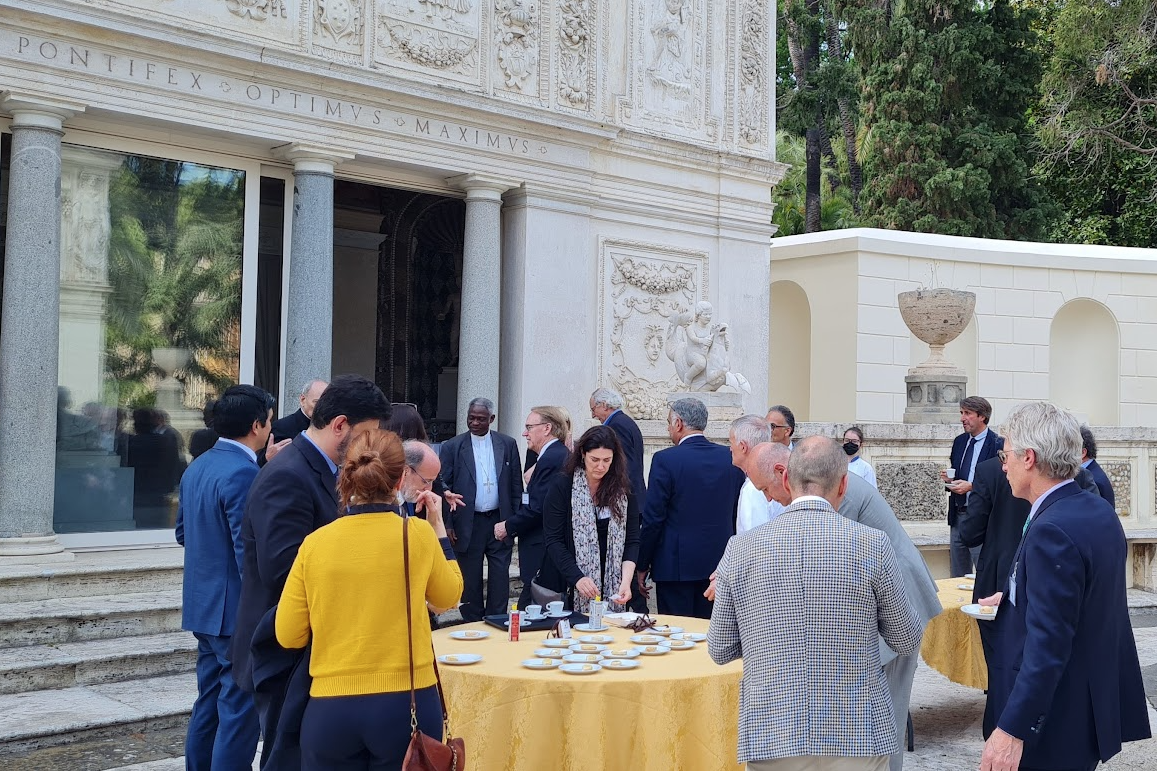 The conference concluded with two stimulating roundtable discussions. The first focused on ways to advance excellence and innovation in the olive oil industry. Dan Flynn, formerly of UC Davis, moderated the discussion among Jaime Lillo from the IOC, Eleni Melliou from the University of Athens, Leandro Ravetti from Cobram Estates, Javier Fernandez Salvador from UC Davis, Imene Trabelsi Trigui from the University of Sfax and Rosa Vano from Castillo de Canena.

A wide-ranging discussion touched on many topics including ways to improve the economics of olive oil production and marketing, and the growing role played by women in the industry. On the topic of economics, Ravetti discussed the high-density production model, while Vano discussed the importance of value-added marketing of early harvest high phenolic olive oils. Fernandez stressed the importance from an agricultural perspective of maximizing profits of farmers, which can be accomplished in part in more traditional, less capital intensive groves by instituting a second harvest which has the potential to increase yield and profits, a practice Vano supported.

The second roundtable addressed ways to establish a better-educated olive oil consumer market. Greg Drescher moderated this panel on which I sat along with Paul Bartolotta from The Bartolotta Restaurants, Maria Loi from Loi Estiatorio Restaurant, Teresa Perez from Spanish Interprofesional, and Rafi Taherian from Yale.  Teresa Perez and I addressed our efforts to combat misinformation about olive oil including fears about cooking with extra virgin olive oil and a distrust of the industry. Bartolotta and Loi both stressed the importance of educating consumers through positive olive oil experiences in restaurants. while Taherian discussed efforts to indoctrinate Yale students as olive oil users at university dining services.

As one of the final comments of the conference, Bartolotta appropriately pitched a case for an “ecumenical” appreciation of olive oil…supporting all grades and qualities of olive oils, not just the highest quality.

As noted above, at the inception of the conference, Dr. Willett posed the fundamental question: “What is the role of olive trees in supporting a healthy, sustainable, and just world?”  While the conference explored various aspects of that question--and concluded that the world heritage of olive oil clearly has much to offer around all of those imperatives--there is still much work, much research, to be done.

Thank you to the PAS for organizing this inspirational conference and let’s hope it is the first of many. 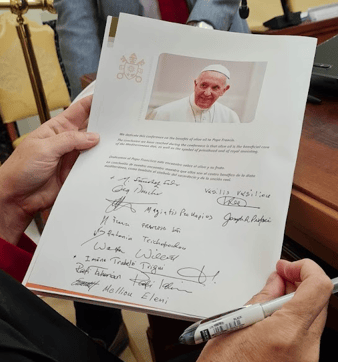 We dedicate this conference on the benefits of olive oil to Pope Francis.

The conclusion we have reached during the conference is that olive oil is the beneficial core of the Mediterranean diet, as well as the symbol of priesthood and of royal anointing. 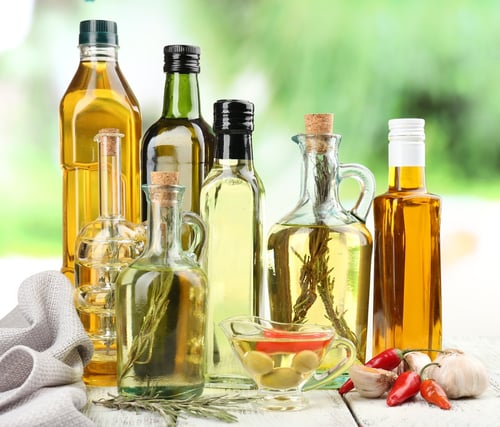 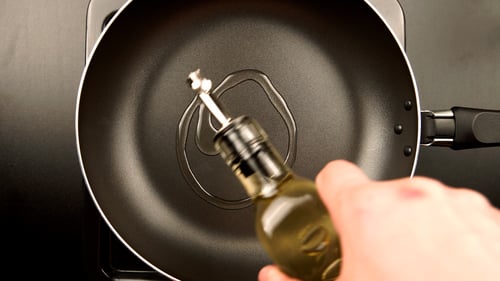