The NAOOA Files Standard of Identity Petition with the U.S. FDA 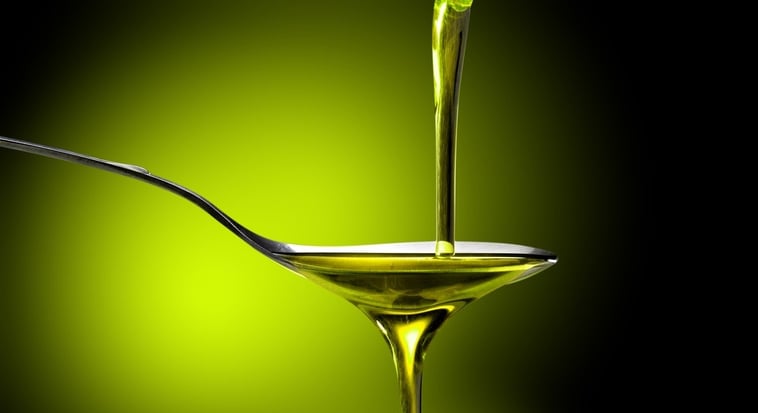 The North American Olive Oil Association (NAOOA), whose members represent the majority of olive oil sold in the United States, today filed a standard of identity petition (“Industry Petition”) with the U.S. Food and Drug Administration (FDA). Such a standard would eliminate confusion among consumers and promote fair dealing in the industry.

“Olive oil is recognized as the healthiest cooking oil by a wide majority of Americans, but less than half of households use it,” said NAOOA Executive Director Joseph R. Profaci. “According to consumer research we recently conducted, confusion over olive oil labels and terminology are leading causes. We’ve filed our Industry Petition to help address these concerns.”

As part of its petition-development process, the NAOOA asked 1,500 U.S. consumers about their perceptions of olive oil, and the findings demonstrate significant confusion. For example, 60 percent of those surveyed were not sure of the meanings of “virgin” and “refined” cooking oil, despite there being significant differences in the two. (Virgin oil is extracted mechanically without the use of heat or solvents.) Only one-third of consumers believe the term “extra” when applied to “virgin olive oil” is anything more than marketing. (It is a specific grade of olive oil that has to meet strict parameters.) Nearly one in three people do not believe or are not sure that olive oil comes from olives. (It does!)

Additionally, despite peer-reviewed research conducted by scientists from the U.S. Food and Drug Administration (FDA) showing a low prevalence of adulterated olive oil in our country’s retail stores, many Americans are concerned that their olive oil might not be the real deal.

“Paving the way for more consumption of heart-healthy olive oil in America would be to our mutual benefit. The scientific consulting firm Exponent found that just a 20 percent increase in adherence to a Mediterranean-style diet, of which olive oil is the cornerstone, would save our country $20 billion in healthcare costs,” said Profaci. “The way we remove longstanding barriers to people consuming this wholesome, delicious food is through a standard of identity.”

The NAOOA has been advocating for a standard of identity since the organization was founded, first filing a petition with FDA in 1990 and again in 2012. It initiated a process to develop the latest petition two years ago and sought a range of voices from regulators and scientific experts to consumers and industry players (domestic, international, large and small alike).

With the benefit of consumer research, the Industry Petition takes concrete steps to bring clarity to olive oil labels and restricts the use of potentially misleading terms like “pure” and “extra light.” It also focuses on assuring olive oil authenticity by using the latest scientifically backed standards and methodologies.

In these ways, the Industry Petition goes further to address consumer concerns than another petition filed late last year by a group representing a relatively small but meaningful share of the U.S. olive oil market (the “November Petition”). The Industry Petition is able to better articulate those concerns because of the significant consumer research conducted by the NAOOA. From a practical standpoint, the Industry Petition also introduces a novel option for updating the standard of identity in the future as science and technology advance.

“Though there is substantial alignment between the two petitions, we believe the enhancements we made are critical and would provide flexibility to continue to introduce new quality standards in the future as scientific and industry consensus evolves,” added Profaci. “We’re advocating for strong standards because we know what it takes to give consumers confidence in the integrity of their olive oil. No one has done more random testing or sought to defend the category in courts of law in recent years more than the NAOOA. We also know that to increase the effectiveness of our existing enforcement efforts, a uniform national standard is essential.” 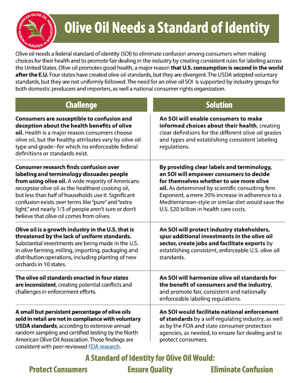 Established in 1989, the North American Olive Oil Association is a trade association of producers, marketers, packagers and importers of olive oil in the United States, Canada and their respective suppliers abroad. The association provides its members, among other services, with guidelines on labeling and quality, and a quality seal certification program, which was the first in the country. The NAOOA is also a member of the International Olive Council’s Agreement for the Quality and Control of the Olive Oils and Olive-Pomace Oils Sold on Import Markets, through which the NAOOA has been able to conduct random off-the-shelf quality control testing of upwards of 200 samples per year. The association strives to foster a better understanding of olive oil and its taste, versatility and health benefits. For more information, visit www.AboutOliveOil.org.

Why did the NAOOA file this Industry Petition after the November Petition was filed?

Because the November Petition is in substantial alignment with our proposed standard, we considered merely submitting comments to FDA in lieu of filing a separate petition. But policymakers provided clear signals in regulations and other guidance documents, as well as in direct communications, that a new standard of identity petition must have certain elements. Those elements include consumer research data establishing the need for a standard of identity and detailed support for any proposed deviations from the Codex Alimentarius.

FDA declined to adopt an olive oils standard in 1982 precisely because no consumer data had been submitted to demonstrate that a standard was needed. Regarding the Codex, as FDA has made clear, “[i]f a food standard presented in a petition is different from the requirements in a Codex standard for the same food, we are proposing that the petition should specify the reasons for these differences.” The fact the November Petition lacked both of these elements would, in our opinion, make responding by way of comments both ineffective and difficult. We are confident that filing our own Industry Petition will present the issues in a way that is cleaner and easier to understand for both FDA and the public.

In short, the Industry Petition is bolstered by consumer research establishing the need for a standard of identity, and it indicates proposed changes to the Codex standard that we believe are necessary to better protect American consumers. This step follows one of FDA’s guiding principles for reviewing proposed standards of identity: harmonization with international food standards “to the extent feasible”—but not if that means compromising the rights of American consumers.

What are the key differences between the Industry Petition and the November Petition?

In addition to addressing these specific consumer concerns, the Industry Petition:

Consumer research shows substantial confusion over olive oil labels. Unlike the November Petition, perhaps because of a lack of consumer research, the Industry Petition prohibits the use of the term “pure,” except to describe extra virgin olive oil, and restricts the term “light” from being used in the statement of identity of any olive oil. The Industry Petition also tackles one of the most confusing parts olive oil terminology. The prevalent international standards have historically included a grade of olive oil called “olive oil”— yes, “olive oil grade olive oil”—defined as the mixture of refined olive oil and virgin olive oils, which the Industry Petition would do away with. Instead, producers would have the choice to identify the grades in the product name (e.g., “Refined Olive Oil and Virgin Olive Oil”) or to use the generic term “Olive Oil” as the product name provided they disclose the grades in an ingredient statement.

Additionally, while FDA scientists’ peer-reviewed research points to the fact that the prevalence of adulterated olive oil in the U.S. market is low, consumer research data show adulteration (i.e., olive oil that’s been mixed with another type of oil) is a major concern. Our Industry Petition is considerably stronger on authenticity testing in many different ways. For instance, we propose maintaining the limit established by the Codex for a compound called campesterol, which is a critical marker for detecting adulteration with oils like canola, soybean and sunflower. By contrast, the November Petition proposes a substantially higher campesterol limit (higher indeed that the voluntary olive oil standard adopted by USDA as proposed by the California Olive Oil Council) because some olive oils from certain “New World” producing countries like Australia may have naturally higher levels of campesterol. Assuring open trade with such countries is a valid concern, but a solution to this problem already exists that doesn’t put American consumers at risk of increased adulteration. Our Industry Petition adopts this solution, which is a decision tree used in the Codex to assure authenticity of non-compliant olive oils up to the USDA standard limit but without facilitating fraud on American consumers. The Industry Petition is also stronger than the November Petition by including the latest revisions to approved methodologies for authenticity testing and other analyses.

The Industry Petition is stronger in another key respect. FDA standards of identity are extremely difficult to obtain and, once obtained, to revise. This is a challenge because olive oil standards and methodologies are continuously updated as technology and science advance. Following exploratory discussions with FDA and USDA, the Industry Petition includes a novel option to make it easier to update the standard of identity in the future. It would involve allowing the physico-chemical and organoleptic standards for olive oil and olive-pomace oils to be maintained by the USDA (which currently maintains the voluntary standard on these oils), while the essential grade definitions and labeling rules, for which revision is less critical, would be part of FDA regulations.

Other differences between the petitions relate to certain quality standards proposed by the November Petition. NAOOA members are committed to improving quality and support higher quality standards that are adequately supported by science and won’t erect unjustified trade barriers. However, the November Petition proposes lowering the level of UV absorption (K232) from the widely accepted international standard. This action would effectively put up a trade barrier on some extra virgin olive oils from Tunisia (one of the world’s five largest producers). Such an action, in our opinion, would restrict trade and could potentially raise prices for American consumers without justification.

The November Petition also proposes to add requirements for pyropheophytin (PPP) and diacylglycerols (DAGs), and our Industry Petition does not. While NAOOA recognizes that PPP and DAGs limits have the potential to improve quality control, particularly in the area of estimating shelf life, we are following the lead of the Codex Committee on Fats and Oils, in which the U.S. government participates. Just last year, the committee declined to adopt PPP and DAGs in the Codex Standard because it determined additional scientific data was warranted. Indeed, those chemical standards are not included as parameters in the Codex Standard, International Olive Council standards, or any other national standard. If an international consensus develops over the use and appropriate limits for these chemicals, NAOOA would be willing to revisit the question and, especially if we are successful in our proposal to facilitate future revisions, consider supporting inclusion of these chemicals in the standard in the future.