What kind of olive oil should you buy? Cold-pressed, first pressed or unfiltered? Here is a list of terms you may see on a bottle of olive oil to help you choose.

A glossary of olive oil terminology

Virgin -  The use of the term "virgin" to describe an olive oil indicates that the oil was extracted at low temperatures by mechanical means only without the use of chemicals, and that it meets the quality standards for that grade.  If an olive oil is NOT described as "virgin," it is an indication that at least some of the olive oil in the product has been refined in a process similar to the process used for producing vegetable oil.   Olive oil that has been refined by definition contains oil that is not as flavorful as virgin olive oils...but has the same desirable fatty acid composition (i.e. predominantly monounsaturated fat) as virgin oils.

Extra Virgin -  As in life, when it comes to  olive oils, being a virgin is a yes or no proposition.  When a virgin olive oil is described as being "extra," it does not mean it is "more" virgin; rather,  the term indicates that the oil is a superior or premium virgin oil, meeting higher quality standards  than those that apply for the ordinary "virgin" grade of olive oil.

Cold-pressed and First Cold-Press  - The use of the terms "cold pressed" or "first cold-press" on an extra virgin olive oil label is intended to indicate that the oil was extracted by mechanical means  at temperatures below 27ºC (80.6ºF). The use of these terms is redundant; under the international standards now in effect around the world, in order for an olive oil to be labeled as "virgin" (including "extra virgin")  it must be extracted by mechanical means at temperatures that will not alter the oil (and of course, without any chemicals).  To the extent these terms refers to a "press," the term is mostly figurative--nearly all olive oil is extracted using other mechanical means (malaxers and centrifuges) instead of presses.   So in today's world the terms "cold-pressed" and "first cold-press"  have little actual significance.  Learn more about how olive oil is extracted.

Estate bottled - This means that the oil was harvested and pressed at the same farm where the olives were grown.

Olio nuovo - This means "new oil".  It refers to olive oil that has been recently harvested and extracted. It is a seasonal product that is only available in the fall/winter (if harvested in the Northern Hemisphere) and typically is extremely fresh, robust and flavorful.

Unfiltered - The majority of olive oil is filtered to remove olive solids. Unfiltered olive oil uses gravity to separate the solids from the oil. Some sediment may remain. Read more about unfiltered oil.

Organic - Like other forms of organic produce, organic olive oil means that the olives were grown without the use of chemical pesticides or chemical fertilizers. An accredited organization needs to certify the olives as organic.

Robust/Delicate - This is a description of flavor.  Robust means full-bodied flavor that pairs well with other strong flavors like tomatoes or meat. Delicate or mild olive oil go well with fish or vegetables.

DOP -  Denominazione d' Origine Protetta (roughly, "protected designation of origin") means that the oil was produced from olives grown and processed in a given area. There are also seals that indicate "Protected Designation of Origin" or "Protected Geographical Indication" offered by the European Union. 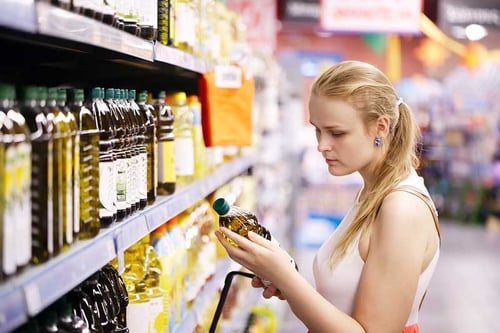 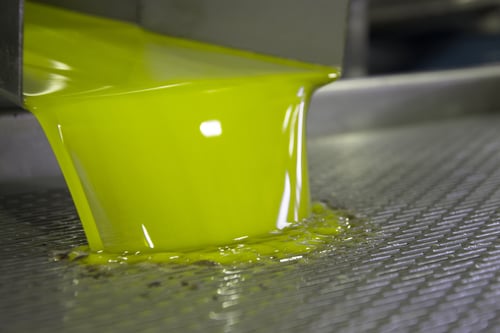 If you plan to visit an olive mill this harvest season—or someday, read this first.