What is the Mediterranean Diet? 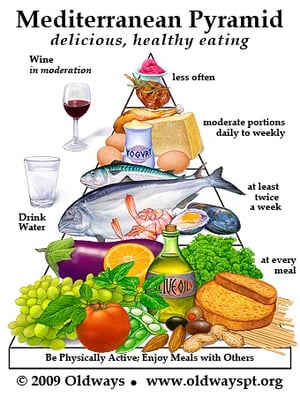 The Mediterranean Diet Pyramid is a helpful, visual guide to understand how to follow the diet.  Every meal should  feature fruits, vegetables, whole grains, legumes or beans prepared with olive oil. Fish and seafood are recommended at least twice a week. Moderate amounts of eggs and dairy, especially yogurt and cheese can be consumed as part of the diet. Red meat, saturated fats and sweets should be eaten sparingly.  You do not need to count calories or grams of fat as part of this diet.

It's hard to believe, but when the Med Diet Pyramid was developed 25 years ago, it was controversial. The Pyramid was developed by the Oldways Preservation and Exchange Trust, the Harvard University School of Public Health, and the World Health Organization. It was introduced around the same time as the United States Agriculture Department's Food Guide Pyramid.  The USDA Pyramid does not distinguish among fats. They are all labeled with the warning  "use sparingly."  In contrast,  the Mediterranean Diet Pyramid lists olive oil at the bottom of the pyramid as a food to consume at every meal.

The USDA Pyramid reflected the typical dietary advice of the 1980's and '90's, which was to avoid fat at all costs. Americans binged on highly processed fat-free snacks, salad dressings and dairy products, believing they were healthy. The fat-free fad led to poorer health for America. Obesity, diabetes and other diet-related illnesses exploded into what some medical professionals have called an epidemic.

Olive Oil and the Mediterranean Diet

Now we see that Oldways had it right.  Olive oil, consumed for thousands of year in the Mediterranean region, is an integral part of the Med Diet.  Many of the health benefits of the diet are attributed to the powerful health benefits of olive oil.

The PREDIMED Study,  the world’s largest study on the Mediterranean diet,  found that a Mediterranean Diet  with no restrictions on calories and rich in fat from olive oil and nuts was associated with a decrease in body weight and less gain in belly fat than compared to a control diet.  The participants consumed 3-4 tablespoons (400 calories) of olive oil a day.

Olive Oil Nutrition: What is the Difference Between Antioxidants and Polyphenols?
Mediterranean Diet The Most Effective for Long Term Heart Health, New Study Finds
Olive Oil For the Prevention of Colon Cancer